Right before dad went, he managed to get a new scanner from a friend. I've only just recently hooked it up and started working with it and it's pretty awesome (well, compared to the rattle-box we both worked with since 2003). Here's a scan of a sketch I did a month back. 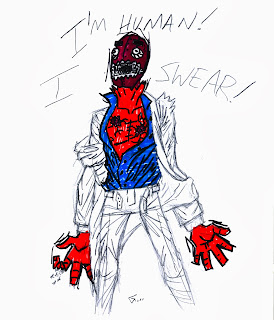 And now for something for completely different...

Today's Sean Artifact, like the many that have yet to be seen, is one of those small glimpses of what could have been a mind-blowingly awesome project.

Dad met a lot of cool people, that is for sure, but one person who absolutely loved working with dad was the insanely-talented man with a talent for insanity, Ralph Niese, who does the comics Mekano Turbo and 2491 A.D. Ralph was one of many who tried to get dad to regularly draw comics but as was said to me by the big guy himself, he just wasn't a fan of drawing comics, although he loved to read them. He was more of a one picture kinda guy, moving from one idea to the next.
Dad did one story for 2491 A.D., a Crowhead story, but he was always welcome to do another.
Dad began forming the idea for one which he called "Braincase and the Diesel Dinosaurs". 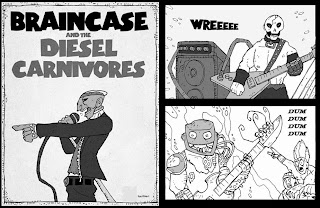 The idea came to him in 2010 (when "Scott Pilgrim" had just come out on DVD and I was still freaking out about it), during one of our many late-night movie viewings, this one being "Electric Dragon 10,000 V", one of my dad's favorites. Braincase, a tokusatsu hero, lead his punk band "The Diesel Carnivors" on gritty, violent and head-banging adventures through a "Mad Max" type of apocalyptic land where the world has gone back to the wild days while society attempts to rebuild itself.
This was all dad drew of it because he had work up the ass, leaving us only a three-panel peek at Braincase's brain case and his merry band of ruffians.
Posted by Griffin Hartter at Thursday, May 16, 2013 No comments: