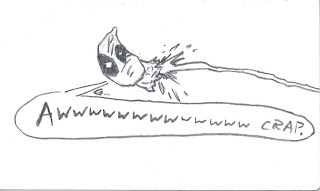 Apologies for how late this post is. I needed a day to decompress.
Comiccon was a great experience. Lots of talent, lots of crazy, lots that I've learned for New York in October.
I'd like to take this opportunity to thank Sock Talk's Phil Healy and Jon Caron as well as Never Gear's Adam Black for their help and promote independent comic creators Tony Sedani and Rian Miller, two very awesome artist/writers responsible for the insane indie comics "Return to Rander" and "Man-Gull" respectively. I'd also like to shout out to the very talented Patt Kelley who showed off some real cool shit, comic writer Jennie Wood who showed off her book "Flutter" which seemed really interesting and outside of the box and illustrator Nick Mockoviak who was very helpful in giving advice and showed real talent and ambition in the projects he's been involved in such as "Hudson Valley Zombie Apocalypse".
Keep an eye out for updates on "The Illusory", the short film I'm making with some buds. I wrote the final draft of the script two days before I left for Comiccon and we'll be building props soon. It's gonna be cool.
I'll be getting back into the swing of things and regularly putting up new stuff on here so keep an eye out.

As I walked through the Con floor and overloaded my senses with things too awesome to be in one place, I could hear dad's voice saying "Awww, dude, you have to buy that!"